Ben Bernanke's memoir is now out and is unapologetically pro-Fed.  It is titled The Courage to Act.  Here is the cover quote:

The main point of Bernanke's book is that absent the Fed's interventions over the past seven years the U.S. economy would have undergone another Great Depression.  Thanks to him and his colleagues at the Fed the world is a much better place.

There has already been some push back on this Bernanke triumphalism.  George Selgin, for example, notes that the recovery under Bernanke's watch was anemic.  Inflation consistently undershot the Fed's target and the real recovery was weak.  We may not have experienced another Great Depression, but we sure did get a long slump.  Ryan Avent makes a similar point by observing that Bernanke had a chance in late 2011 to do something bold by endorsing a NGDP target, an action that could have jolted the economy from its doldrums.  But alas, Bernanke failed to muster up the courage to have what Christina Romer called his "Volcker Moment".

Expect more push back along these lines from a book with such a bold title.  One strand of criticism that many observers miss, but I hope will be considered in future reviews of Bernanke's book is the role the Fed played in allowing the crisis to emerge in the first place.  Could the Fed have done more to prevent the recession from becoming as severe as it did?  Maybe a recession was inevitable, but was a Great Recession inevitable?  These are the questions first raised by Scott Sumner and echoed by others including me.  Our answer is no, the Great Recession was not inevitable.  It was the result of the Fed failing to act aggressively enough in 2008.

This understanding draws upon the fact that the housing recession had been going on for about two years before a wider slowdown in economic activity occurred.  As seen in the two figures below, sectors of the economy tied to housing began contracting in April 2006 while elsewhere employment growth and nominal income continued to grow.  This all changed in the second half of 2008. 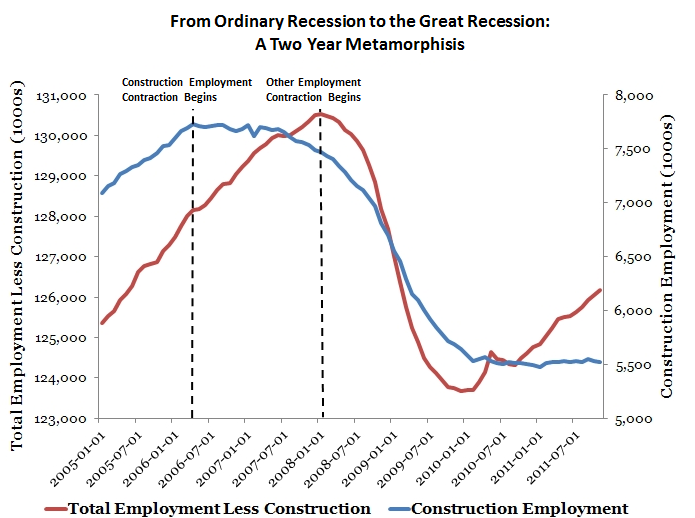 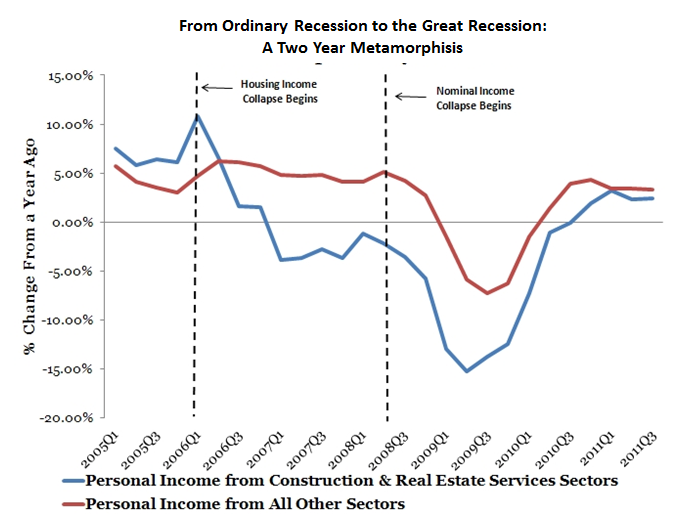 So what went wrong in the second half of 2008?  Why did a seemingly ordinary recession get turned into a Great Recession?  We believe the Fed became so focused on shoring up the financial system and worrying about rising inflation, that it lost sight of stabilizing aggregate demand.  Based on theses concerns, especially the latter, the FOMC decided to do abstain from any policy rate changes during the August and September 2008 FOMC meetings.  But by doing nothing at these meetings the FOMC was doing something: it was signaling the Fed would not respond to the weakening economic outlook.  The FOMC, in other words, signaled it would allow a passive tightening of monetary policy in the second half of 2008.

A passive tightening of monetary policy occurs whenever the Fed allows total current dollar spending to fall, either through a endogenous fall in the money supply or through an unchecked decrease in money velocity.  The decline in the money supply and velocity are the result of firms and households responding to a bleaker economic outlook.  The Fed could have responded to and offset such expectation-driven developments by properly adjusting the expected path of monetary policy.

The figures below document this monumental failure by the FOMC.  The first one shows the 5-year 'breakeven' or expected inflation rate.  This is the difference between the 5-year nominal treasury yield and the 5-year TIPs yield and is suppose to reflect treasury market's forecast for the average annual inflation rate over the next five years.  The figure shows that prior to the September 16 FOMC meeting this spread declined from a high of 2.72 percent in early July to 1.23 percent on September 15.  That is a decline of 1.23 percent over the two and half months leading up to the September FOMC meeting.  This forward looking measure was screaming trouble ahead, but the FOMC ignored it. 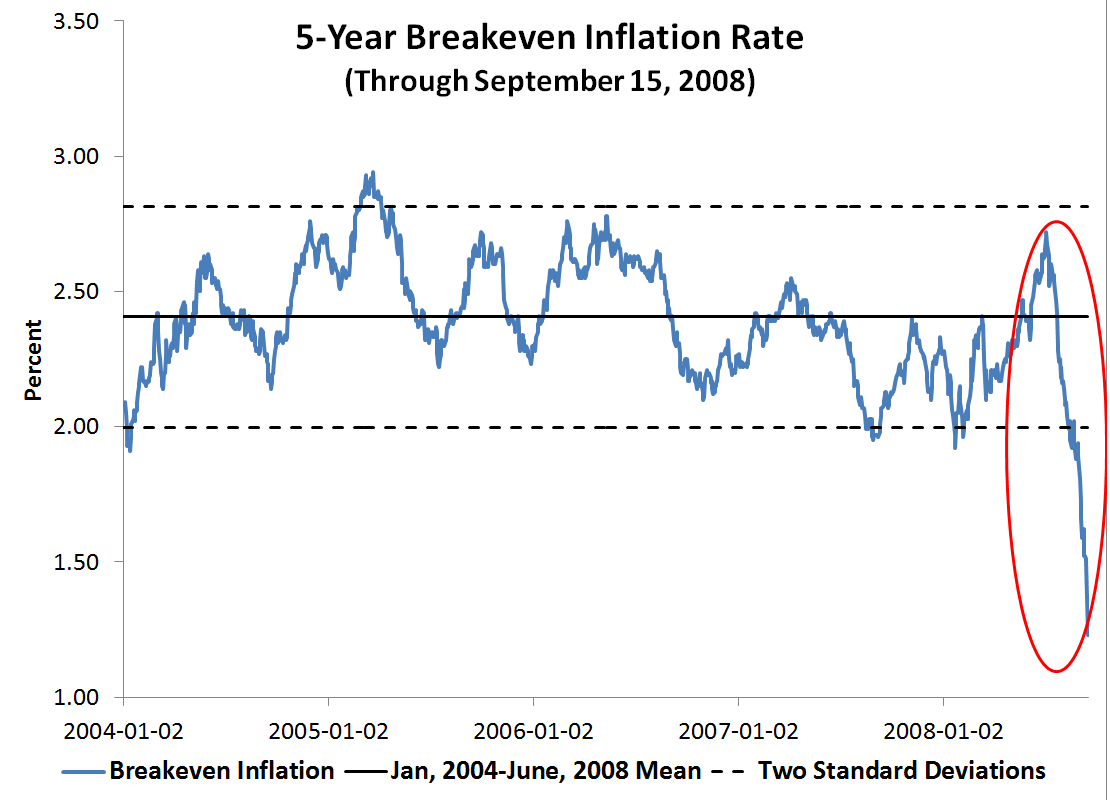 One way to interpret this figure is that the Treasury market was expecting weaker aggregate demand growth in the future and consequently lower inflation.  Even if part of this decline was driven by a heightened liquidity premium the implication is the same: it indicates an increased demand for highly liquid and safe assets which, in turn, implies less aggregate nominal spending.  Either way, the spread was blaring red alert, red alert!

The FOMC allowed these declining expectations to form by failing to signal an offsetting change in the expected path of monetary policy in its August and September FOMC meetings.  The next figure shows where these two meetings fell chronologically during this sharp decline in expectations. 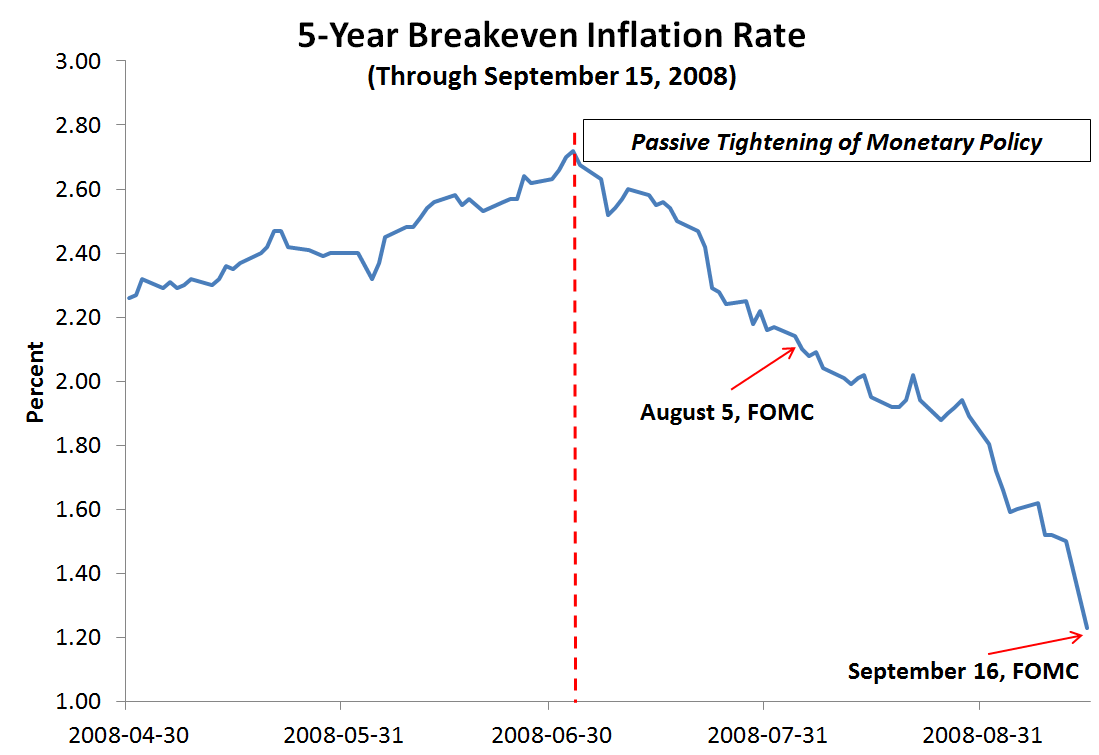 As noted above, this passive tightening in monetary policy implies there would be a decline in the money supply and money velocity occurring during this time.  The Macroeconomic Advisers' monthly nominal GDP data indicates this is the case: 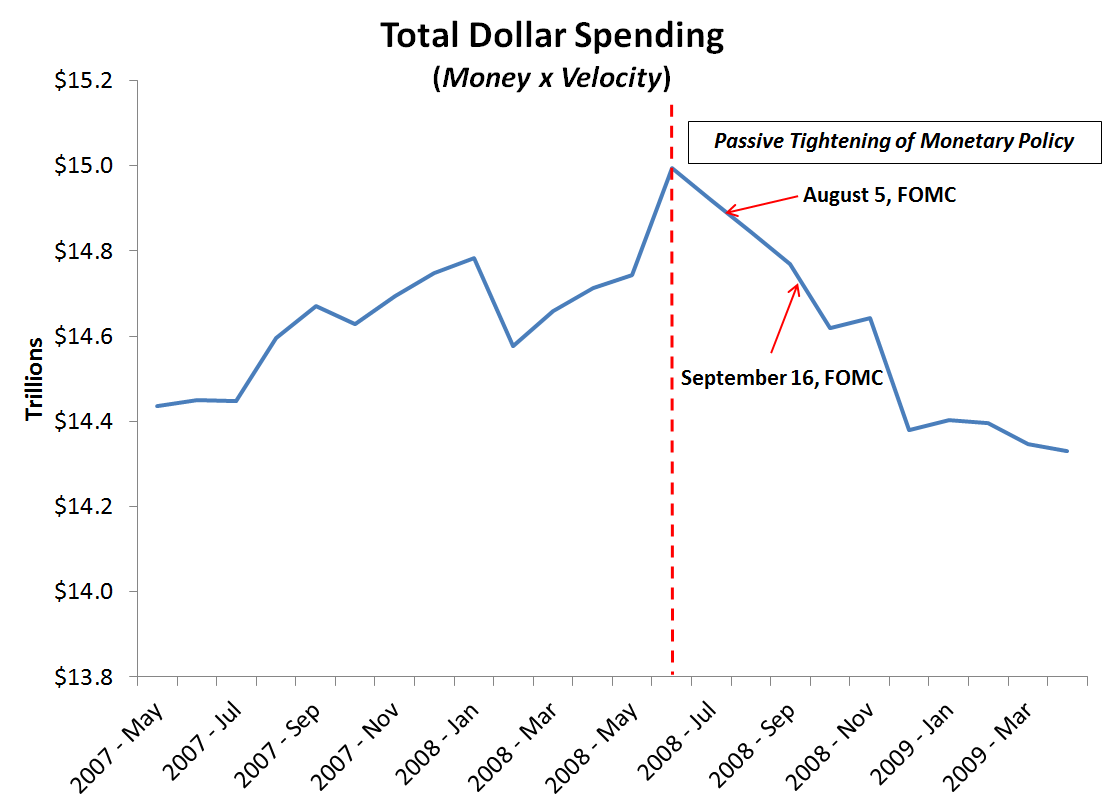 The Fed could have cut its policy rate in both meetings and signaled it was committed to a cycle of easing.  The key was to change the expected path of monetary policy.  That means far more than just the change  in the federal funds rate. It means committing to keeping the federal funds rate target low for a considerable time and signaling this change clearly and loudly.  With this approach, the Fed would have provided a check against the market pessimism that developed at this time.  Instead, the Fed did the opposite: it signaled it was worried about inflation and that the expected policy path could tighten.

Recall that Gary Gorton provides evidence that many of the CDOs and MBS were not subprime, but when the market panicked a liquidity crisis became a solvency crisis. This is especially true in late 2008.  Had the Fed responded to the falling market sentiment in the second half of 2008 the financial panic in late 2008 may have been far less severe and the resulting bankruptcies fewer.  Again, the worst part of the financial crisis took place after the period of passive Fed tightening.  This is very similar to the Great Depression when the Fed allowed the aggregate demand to collapse first and then the banking system followed.

So had Fed had the courage to act in 2008 the economy would be in a very different place today.  Future reviewers of Bernanke's book should keep that in mind.

P.S. For a more thorough development of this view see the book by Robert Hetzel of the Richmond Fed.

[Cross posted from Macro and Other Market Musings]

David Beckworth is a Senior Research Fellow with the Program on Monetary Policy at the Mercatus Center at George Mason University, an adjunct scholar at the Cato Institute, and a former international economist at the US Department of the Treasury. He is the author of Boom and Bust Banking: The Cause... How Not to Stress Test: UK Edition What the FOMC Minutes Reveal about Normalization Fed economists defending interest on reserves have recently called on an unexpected quarter by reviving interest in Milton Friedman’s 1969 essay, “The Optimum Quantity of...